Dear reader, if you’re a fan of fantasy and haven’t yet picked up a book by this talented author then stop everything and go do it NOW! Is my enthusiasm giving away the review already? Probably, but when it comes to Fallon it’s unavoidable. Along with Sara Douglass, Jennifer Fallon has succeeded in putting great quality Australian fantasy on the radar. I really should have started with her first series – The Demon Child Trilogy, but the Second Sons trilogy is my particular favourite and I just couldn’t resist!

It was far too difficult to condense about 3000 pages (3 books) into a few short sentences to make a synopsis, so I’d like to direct you to the author’s homepage: jenniferfallon.com.au. Descriptions of each book will be there, plus a lot of cool extra stuff on various aspects of her fantasy world and the process of writing the series. Instead of a synopsis, I’ve made a list of the main characters with some basic descriptions. Enjoy!

Dirk Provin – second son of Duke Wallis and Morna Provin. Intelligent on the level of genius, but with a political acumen that would make Julius Caesar jealous.

Kirshov Latanya – second son of Antonov Latanya. Immature, and obsessed with honour and emerging from his father’s shadow. Engaged to Alenor D’Orlon since childhood. Becomes infatuated with the acrobat Marqel at first sight.

Antonov Latanya – Lion of Senet. Sacrificed his third son in order to end the Age of Shadows. Believes unquestioningly in the divinity of Belagren and the Shadowdancers. Power-hungry, ruthless, devious and cunning.

Belagren – High Priestess of the Shadowdancers. A master manipulator – she manipulated the genius mathematician Neris Veran to tell her the date of the second sun’s return, and manipulates Antonov into believing in her own divinity.

Alenor D’Orlon – daughter of Queen Rainan of Dhevyn, heir presumptive. Quiet, dignified and determined. She nurses a crush on her fiancé Kirshov, who does not return her feelings.

Tia Veran – daughter of Neris Veran, the mathematician who enabled Belagren’s rise to power. She lives in Mil with her drug-addict father and other exiles from Dhevyn, and believes strongly that the Lion of Senet, Belagren and the Shadowdancers should be crushed. Deeply suspicious of the motives of every outsider, especially Dirk’s.

Marquel – Landfall bastard, acrobat with travelling circus, and occasional prostitute. completely amoral, foolish, and willing to do anything to further her own cause.

Misha Latanya – first son of Antonov Latanya. Although very intelligent and capable, he is discounted by his father due to his physical disabilities.

Johan Thorn – deposed King of Dhevyn, brother of Rainan D’Orlon. Last known living as an exile in Mil with his wife and daughter. 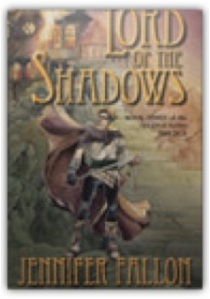 So there’s probably not much suspense going on at the point right? You’ve already guessed that I love this series; what you don’t know is why! Let’s begin with plot construction.

Most fantasy stories follow a similar basic plotline. There is the Hero, who has to overcome great odds and often battle with inner demons, in order to beat the Villain, and in doing so save the world. Also, there is usually some element of magic involved. Here’s where the Second Sons is completely different. There is no real magic. Arthur C. Clarke’s 3rd law can sum up Fallon’s version of magic here: ‘any sufficiently advanced technology is indistinguishable from magic’. The people of Ranadon, and most especially Antonov Latanya, are unable to understand the complicated mathematics that Neris Veran uses to accurately calculate the return of the second son (the end of the Age of Shadows). To them, this is magic in the form of the deity ‘the Goddess’, and Belagren is the magician.

The real magic of this story is the intricately woven plot. Every character is involved in multiple schemes in order to achieve their goals. It is interesting to see how the nobler goal of bringing down a tyrant and the pettier one of being the favourite mistress can be achieved through remarkably similar means. The political nature of the plot means the story is interesting and fairly fast-paced, especially books 2 and 3. The twists and turns represent the real unpredictability of the characters.

This series is evidently a comment on the subversive nature of religion. Fallon makes it clear that religion is an effective way of controlling the masses and consolidating power. It also shows the interaction between politics and religion – how one feeds the other. Also, in terms of breaking the fantasy mould, Fallon also has an interesting way in showing how to get the job done. Dirk, our hero, is intelligent enough to realise that bringing Antonov and Belagren down by sheer force is impossible. As a noble and decent person, he’d be expected to launch a hopeless attack anyway because this is the right thing to do. Instead he decides to return to Antonov’s playing field and bring the Shadowdancers down from the inside in the most cunning way possible. In a nutshell, the author’s message can be summed up in three words: ‘Knowledge is Power’.

Moving on to characterisation, Fallon does an impressive job once again. Dirk is hardly the ideal hero, but he is certainly endearing. Throughout his most Machiavellian schemes, there are always glimpses of the seventeen-year-old boy inside. Contrast him with Kirsh, who’s actions make him seem a villain, but whose motives are conventionally more ‘hero-like’ than Dirk’s. And contrast them both to Marqel. She may appear shallow, but we come to find is so superficial in nature that she has no morals or internal motivators other than her own pleasure. She’s a character you love to hate. The only fly in the ointment for me is Tia Veran. She’s meant to be fiery, but she comes off more as a shrill harpy who constantly and purposefully misunderstands Dirk. Thankfully, Alenor (and her cousin – but you have to read the books to find about her) redeems the female cast of this series.

Although the plot is very good, the characters are what make this novel memorable. Fallon leads you through a merry chase of emotions as the story unfolds. My ultimate litmus test of a novel is ‘does it make you think?’ This series will make you think till your brains melt a little. Each character does some right things and some wrong things. Sure, there’s some collateral damage along the way (a few innocent lives lost here and there). The real question is – do the means justify the ends? I suggest you read the series and find out. Trust me, you won’t be disappointed.